a hub for the works of Michael Lejeune

Orphic Elegy is the name I gave to my folk, alt, and worldmusic style material.  Some would call it acoustic rock, others might refer to it as indie.  I’ve always had trouble classifying it, as for me it is sort of a catch-all for anything that doesn’t fall into one of the other major categories I work in.  That’s sort of how I have to do it:  decide what it isn’t, rather than what it is.

As for a pole in the tent, I often cite Dead Can Dance as a major artistic influence.  You can hear this influence directly on the self-titled album, particularly on the song Reeds.  I hope that you’ll hear other things in there that hearken to some sounds you’ve loved.

After Mother’s Mistakes wrapped up the second album, Seldom Reached and Never Kept, Frank and I decided to take a step away from intricate, highly layered composition.  We made the decision to compose a double album where each song is comprised of nothing but a single instrument and vocal, at most.  There would be one album of his material, and one of mine.  The 2-disc LP would be called Naked.

After the project got underway, we started to realize that we had invited back the biggest problem we had about the first Mother’s Mistakes album:  the deeply disparate nature of our material and performances.  What audience the project had would be mostly interested in one or the other album.  Asking them to purchase a more expensive 2-disc package felt like the wrong direction.  We planned instead to make the two collections available separately, and gave them their own names:  Frank’s would be called Before Sunrise, and mine After Sunset.

Performances for Before Sunrise wrapped in mid 2019, and production completed in early 2020, shortly after Frank passed away.  Though I did not perform on the record, I did handle the recording and engineering duties.  Frank didn’t make it to the physical production stage, but as a Biscuit Bend product, it is available on request.

The decision to make After Sunset an Orphic Elegy album was a simple one, as it fit the mold perfectly.  A release date was set at April 1, 2020, a month after production wrapped.  The cover art comes from a night at Salamander City, sneaking dimly lit snaps on my phone during a fireside hangout.  The digipak the printed CDs come with has liner notes with lyrics.

As always, Frank and I dug deep for the lyrical content of both our albums.  We had some important things to say, and we discussed the impact we hoped our messages would have on those who chose to listen.  Each of us exorcised painful demons in our songs, and these were perhaps the most painful of our time working together.  Though he did not perform on After Sunset, his influence is sewn into its composition, even if only in the shared experience. 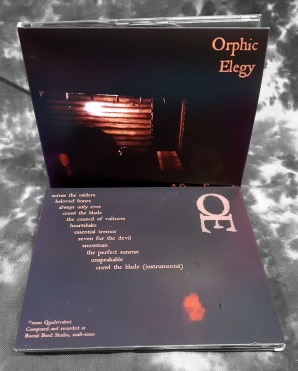 About the Self-Titled Album:

The first album was recorded in 2010, during an active period of my other folk project, Daybloom.  Back then I had not yet taken up recording at a professional level, and was still just catching a reasonable clip here and there with whatever was available.  I purchased a used handheld mp3 recorder (a Zoom H4) from the then-bassist of Son of Mourning for the purpose of capturing material during rehearsal of my various bands, and discovered it had a four-track recording/mixing function.  That tapped into my need to record.

Using a handheld to record an album is a very painstaking process.  Much patience is required.  The lack of ability to edit, punch, or monitor anything is pretty tough.  But I was motivated, and my acoustic composition was flowing too quickly for Daybloom to absorb it all.

For years I’d been collecting instruments of various types, from any source I could.  I came up with the idea of making the songs of this album hinge off of different instruments, to give it a broad palette and a wider range of creative influences.  Scratches came about based solely on a pair of mandolin riffs, some of the first I ever invented.  Reeds was all about creating an Eastern sounding beat with a drone instrument and loud vocals.  Picturesque featured the twelve-string guitar and the banjo.  An accordion can be heard on The Regretful Man.  Into the Underworld uses a real organ from the 1960s that ate up much of my living room real estate, and the only electric guitar on the whole record.  Blake’s Song was a chance for the hand drums I play on the rest of the record to shine without accompaniment.  My dog Blake provided the bark track, and his smile appears on the disk itself.  I like to imagine him playing the drums on the song.

And the last song, the title track, is played on a celtic harp I picked up on eBay in college.  I found the rain and froggy forest soundtracks online, and somehow they just fit together perfectly.

Despite how proud I was of the record, I knew even then that it wasn’t quite high enough quality to make available to the public, due to having done the whole thing on a handheld unit and having performed all the hand drums myself, in layered, unedited tracks.

Years later, I was wrapping up the Enantiodrome demo and the first Nil Significant album, finally recording at a decent level of quality, and I decided to remix and remaster the Orphic Elegy album.  In my naivete I believed it would be quick, an addendum to the larger projects coming to completion at the time.  My mistake.  The process was highly immersive.  I spent more than a hundred hours total.

But in that process, I was able to do much to bring the songs to life in ways I’d only dreamed of before then.  I broke apart those original recorded drums, and requantized them into perfect time.  Many other things were improved, fixed, polished, expanded…  So many advanced techniques were now available!

As always, the learning process in recording was just a bit more thrilling than frustrating, but only just a bit.  Here’s an interesting aside:  the handheld Zoom H4 is battery operated.  When I recorded the songs, I did so while listening to a click track on headphones plugged into the Zoom.  You can actually hear the click on the periodic fade outs in The Regretful Man.  But anyway, the battery operated unit, though digital, did not play clicks at tempos exactly the speed they were set at.  I would find, during remix when finding and setting a timebase for the project, that a tempo I’d set on the Zoom at 135 bpm would actually be 134.995 bpm.  That may not sound like a lot, but by the end of a four minute song, it was huge.

Only two things were added in the 2015 work on this record:  the bass guitar on Reeds, and the female vocals on Scratches.  The vocals came from a session with Jenn Barnett, intended for the Nil Significant album.  Thankfully, I’d had her read a few other pieces while in the booth.  I found her performance of Scratches complimented the song well as a counterpoint to my voice on the last chorus.

I decided I needed to include the lyrics to these songs in liner notes that go with the CD.  To that end, the package contains a few pages and a full set of lyrics for the album.  I put together the artwork around the same time I did the same for the Enantiodrome demo and the Nil Significant album, with some newly acquired, rudimentary Photoshop skills.  The scene with the dead birds is actually right outside my apartment.  There is this migration of crows in Albany every fall, and sometimes the endless stream of birds goes right over my home.  The fall of 2014 was such a year, and the dead littered my street and yard.  Those that could not survive the rigor of long distance travel that year.  One day after work, the scene with those two, lying dead right next to my building…it was too beautiful not to photograph.

The tray card is a picture of new concrete right in front of my building, where a maple leaf lay for some time, lost some of its color to the cement through the rain, and blew away.  Sometimes the most beautiful things are right in front of you.  You must be prepared to see them, or you simply won’t. 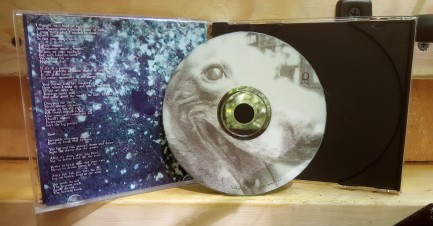